RETURN TO ELITE FOR THE DEFENSE?
By Nate | Friday, June 24, 2011 @ 10:01 am
Menacing. Tenacious. Opportunistic. Junkyard-esque. Those are words that should describe a Georgia Bulldog defense; however, they haven't really been applicable in quite some time. Sure, the 2007 team had some great moments with Asher Allen picking off passes and Marcus Howard blowing up quarterbacks. But I can't in good conscious call that a Junkyard-esque defense when they allowed 30+ points 3 times, including a 44-34 point track-meet victory against Troy....TROY! Yes, I remember how good Troy's offense was that year (they also scored 31 against Florida), and I remember that they finished with 8 wins. That being said, the complete body of work for the 2007 defense just doesn't cut it. 2006 was actually closer, ranking 8th in total defense and allowing 258 ypg and 17.6 ppg. The blemish that season however was the absolute meltdown in the 2nd half that year at home against the Volunteers. 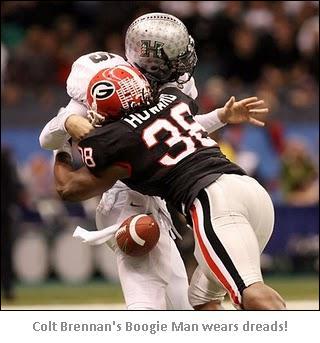 If memory serves, there was a pick-6 in there, compromising turnovers and poor special teams play, so you can't completely hang the 51 points on the defense. Valid excuses, but an elite defense just can't have a 51-spot on its resume. Otherwise, 2006 would probably qualify as the last elite defense to wear the Red and Black.

So, enough of the history lesson. What will it take for the 2011 installment to live up to UGA's historic nastiness? Most would probably point to the nose tackle position and the emergence of Kwame Geathers and John Jenkins (BTW, that dude is an absolute freak ... 6-4, 360, <10% body fat and a sub 5.0 40 ... un-freakin-believable). I can't disagree with that opinion considering that is probably the most important position to making the 3-4 defense work. I'm not going this route, however, because I believe that this position is in great hands with Geathers and Jenkins. For my answer, I'm really looking more for a particular player that needs to take his game to another level for UGA to really achieve greatness. Geathers/Jenkins have to be great for our defense to work, but their role is to free up other players to make plays. Achieving elite status will rely more upon the linebackers and defensive backs taking advantage of the attention that Geathers and Jenkins will command.

Well, if not Geathers or Jenkins, then, a lot of people might think one of the linebackers. I think I could make solid cases for either Jarvis Jones or Alec Ogletree. Those two guys are going to have to play at an All-SEC level for our defense to truly return to the nationally elite. I believe Cornelius Washington is actually sliding over to Justin Houston's vacated spot, so he may actually be in a better position than Jarvis to rack up the sack totals. But, Jarvis is still going to have to lock down on tight ends and really get after the opposing quarterbacks. And, when it comes to Ogletree, I truly believe he has the potential to make some All-American lists at the end of this season. O-linemen and fullbacks will not be able to get out in front of Tree because of the aforementioned nose tackles. That will allow Tree to utilize his supreme athleticism to run sideline to sideline. I'm expecting multiple appearances on SportsCenter for Tree to go along with 100+ tackles.

But no, I'm not going with any of the linebackers. I think there is enough talent on that linebacker corp that playmakers will emerge and the job will be taken care of. If Jarvis or Tree don't exactly live up to my lofty expectations, Robinson, Samuel, Gilliard, Burrows, Stripling (when he gets totally healthy) or any of the talented incoming freshman (Drew, Turene, Wilson, Herrera) are more than capable of flying around and making plays.

My answer might surprise, and will probably come off as me just trying to create a new angle during the throes of an impossibly long off-season. Nevertheless, my answer is Brandon Boykin. Most would say that Boykin has been a solid corner now for a couple seasons, but, he hasn't really entered into the All-SEC, shutdown corner conversation. Don't misunderstand me here. I don't think Boykin HAS to erase the other team's #1 receiver for our defense to be solid. Performing at a similar level as his 2009 and 2010 seasons, combined with solid play in the front 7, will be enough for UGA to have the turnaround season we all hope for. But, my question is about what it will take for UGA's defense to be elite, not just 'solid'. I'm talking top 10 nationally with the playmakers to make any quarterback lose sleep on game-day eve. If Boykin can elevate his game to a true shutdown corner, our defense will be just that. Forcing the quarterback to hold the ball another second to check off that first option will allow Jarvis and Cornelius one more second to get in his face. Being able to lock down the opposing team's #1 threat will allow a safety to help over top of Commings, Smith, Owens, Love, Marshall, Swann, or whatever other corners are in. Playing on an island and not needing that safety help will allow Rambo, Hamilton, Williams or another safety to creep up into the box in run support.

At UGA losing seasons are anomalies, so my hopes and expectations for the 2011 season are truly no different than any other year. I want our defense to take a step from solid to special, and sometimes that step requires solid players to become special players.